Amidst trade rumors, Gary David is focused on playing for country

Amidst trade rumors, Gary David is focused on playing for country 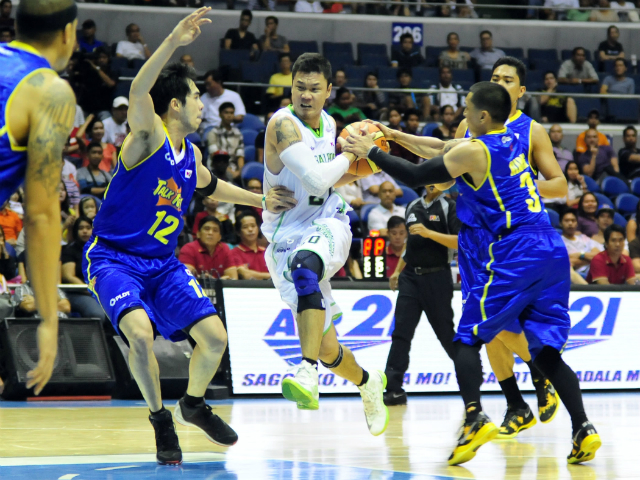 In the past months, Gary David was a regular at the Moro Lorenzo Sports Center. After they were eliminated early in the 2012 PBA Commissioner’s Cup, David went here on a daily basis for therapy. His left foot bothered him throughout that conference but he played through it nonetheless.

While the doctors told him that the best way for it to heal was rest, David chose therapy. Rest was not an option because rest meant not joining the Philippine basketball team.

A few days before the start of the FIBA Asia Championships, David found his way back to Moro. This time he wasn’t there for therapy. David was there to watch his PBA team, GlobalPort Batang Pier, play a tune-up game against Bahrain.

David has not seen his mother team for a while. Preparations for the FIBA Asia Championships included trips to Lithuania and New Zealand that took most of David’s time. Gilas head coach Chot Reyes decided to cancel morning practice that day as the team played a tune-up against a PBA selection the night before. That extra time was all David needed to reunite with the rest of the Batang Pier.


"Welcome back G. David" said the message written on tape. Carlo Pamintuan, GMA News
As he walked in, David was met with a “WELCOME BACK G. DAVID” sign written hurriedly into two strips of Mueller tape. Just days earlier, rumors of his impending trade broke out. David, the heart and soul of this downtrodden franchise, was almost not welcomed back.

Back in the 2008, David’s Air21 Express got to within a win away from winning the Fiesta Conference championship. The team then had David, Arwind Santos, Ranidel De Ocampo, Doug Kramer, JC Intal, and Niño Canaleta. Instead of keeping that core intact, the management traded most of those players away, crippling what could have been a powerhouse team.

In 2012, David went through the same thing again. After their Tigerella run in the Philippine Cup, the Powerade Tigers were torn apart. They lost Marcio Lassiter, Doug Kramer, Sean Anthony and Jvee Casio in rapid succession leaving David without the teammates who almost helped him win a PBA championship.

In those two trades, David was the one left behind. Now, if the intel David got was correct, he’ll be the one to be traded away. If David’s sources are correct, GlobalPort wanted to move on without the guy who carried the team for so long.

David watched as Batang Pier played Bahrain. He sat beside the statisticians, clapping and shouting after his team’s made baskets. GlobalPort defeated Bahrain 80-70 in the tune-up game, even without new recruit Jay Washington.

“Maganda naman yung tinatakbo ng team ngayon,” David said. “Maaga silang nagumpisang mag-practice kaya kundisyon na sila.” He was excited about his team’s future even if his future in the team was in doubt.

After the game, GlobalPort team manager BJ Manalo approached David, they exchanged pleasantries and had a short conversation. The trade rumors were never brought up. For David, there was no need for that.

In his nine years in professional basketball, David has constantly chased a PBA championship but he always fell short.

In fact, he has never won a basketball championship. Not in the NCRAA with Lyceum Pirates. Not in the PBL with the Montaña Pawnshop Jewelers. Not with the Coca-Cola Tigers nor the Air21 Express. Not with the Powerade Tigers and obviously not with the GlobalPort Batang Pier.

Gary David knows that all of his past failures will melt away if Gilas qualifies for the FIBA World Championships.

The big difference for David is that he will no longer be playing for a team with a small fanbase. In his entire career, David has never played for the fan favorites. His fans were rabid but they were also few. Now, he’s not representing GlobalPort, he’s representing the entire PBA. He’s not playing for Batang Pier fans, he’s playing for an entire nation.

David will be representing Air21’s tenacity and Alaska’s resurgence. He will be playing with Talk ‘N Text’s excellence and San Mig Coffee’s explosiveness. He’ll be showing Barako Bull’s discipline alongside Petron’s star power; defending with Rain or Shine’s nasty and shooting with Meralco’s resolve. Gary David will step into the court against the best of Asia with GlobalPort’s hunger and Barangay Ginebra’s never-say-die.