Korean star Lee salutes brave Pingris: 'He was the biggest difference in game'

Korean star Lee salutes brave Pingris: 'He was the biggest difference in game' 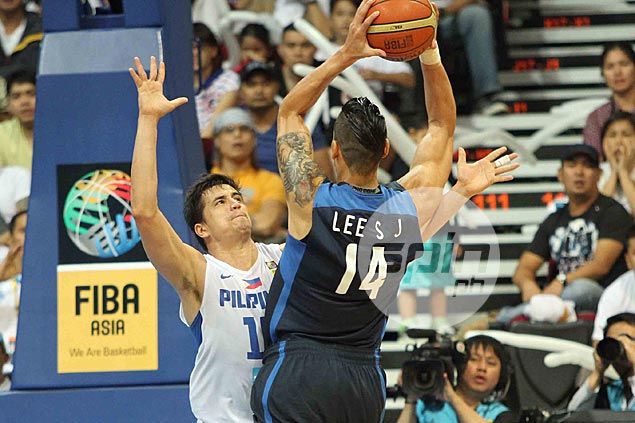 Lee felt the 6-foot-5 Pingris’ brute strength in the second half when they banged bodies on both ends of the floor and fought tooth and nail for every rebound while the audacious Filipino player tried to fill the large shoes left by an injured Marcus Douthit.

“He’s really strong. I mean, he beat us on all the hustle plays, those loose balls, rebounds and all the defensive stops,” Lee told Spin.ph after Gilas' 79-86 win in their highly-emotional Fiba-Asia semifinal match before more than 18,000 fans at the Mall of Asia Arena Saturday night.

"He was the biggest difference in the game."

Pingris rose to the occasion in Douthit's absence for much of the game's last three quarters, scoring 16 points on top of 10 rebounds, six on the offensive end, as Gilas fed off the energy from the crowd.

Lee, who renounced his American citizenship to become a Korean citizen in 2009, admitted that they also had no answer to Gilas Pilipinas’ two-guard set-up that had either Jason Castro and Jimmy Alapag or Castro and LA Tenorio on the floor during the game.

“It was quite an amazing game. We just couldn’t figure out how to stop William (Castro’s name on his Philippine passport) and Jimmy in the end. We wish them luck in Spain (for the 2014 Fiba World Cup),” said the 35-year-old Lee, formerly Eric Lee Sandrin.

The victory towed Gilas Pilipinas to a knockout championship match with former two-time Asian champion Iran on Sunday at 7:30 p.m. at the Mall of Asia Arena.

More importantly, the win enabled the Philippines to return to the Fiba World Cup (formerly World Championship) for the first time since 1978, the year Manila hosted the championships.

Meantime, Lee said they will go all-out on Sunday to try and grab the third and final slot for the World Cup against Chinese Taipei in the battle for the bronze.