Paul George returns to Team USA a star on the rise

Paul George returns to Team USA a star on the rise 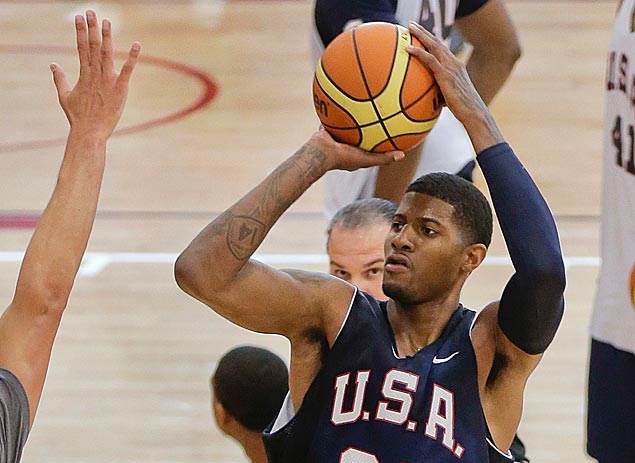 LAS VEGAS — Paul George was brought to USA Basketball camp last summer as part of the US select team, a group of younger players who had no chance to represent their country in London.

Their task was to practice against LeBron James, Kobe Bryant and the rest of the Olympic team, to push them and prepare them for a tournament that is getting harder and harder as the years go by and the world catches up to the United States in both talent and execution.

George's reward for the thankless work was a crash course in what it takes to become a star, and he proved to be a capable student.

George used the lessons he learned about preparation, practice habits and commitment to catapult him through a breakout season with the Indiana Pacers. He returned to Las Vegas a year later for a four-day minicamp as one of the young stars projected to one day lead Team USA into international competition.

"Watching how those guys prepared, this is playing for your country, playing for the Olympics. This wasn't playing for their team, so I can only imagine how they prepared for a season," George said. "That kind of helped me prepare and really put me in a mindset to get better."

The Pacers picked George 10th overall in 2010, and he was a relatively unknown prospect coming out of Fresno State. He had a solid first two seasons in the league, and his combination of size — he is 6-foot-8 — and ability to play on the perimeter on both ends of the floor intrigued USA Basketball managing director Jerry Colangelo.

When he arrived in Vegas last summer, he was coming off a season in which he averaged 12.1 points, 5.6 rebounds and started all 66 games. Then he went to work against the very best players in the league and found out what it really takes to be a star.

George watched, listened and soaked it all up. And he made quite an impression on Colangelo and head coach Mike Krzyzewski during the workouts.

"He showed in my mind last summer that he was one of those key guys going forward," Colangelo said. "And you could tell he really appreciated the opportunity."

Then he used what he learned to tailor his workout regimen and his approach to playing in the season.

George averaged 17.4 points, 7.6 rebounds and 4.1 assists for the Pacers during the regular season and was selected to his first All-Star team. But it wasn't until the playoffs started that George truly asserted himself as a star.

He averaged 19.2 points, 7.4 rebounds and 5.1 assists, all while playing top-flight defense on the perimeter, to lead the Pacers to the Eastern Conference finals.

The seminal moment for him came during a jaw-dropping duel with James in Game Two of Indiana's series against the Heat. As the clock wound down in the third quarter, George crossed over James, blew past the MVP and threw down a huge dunk over Chris Andersen. With less than five seconds to play in the period, James came right back at George, getting him to backpedal as they crossed half-court before James rose up and drilled a long 3-pointer at the buzzer.

James sought out George after the play and shook his hand, a nod from the world's best player to a youngster coming after him.

"He's really good," James said after that game. "He's going to be a great one. His maturity and his game have definitely risen in just one year because of the opportunity Frank Vogel has given him. His teammates have a lot of confidence in him, and he has confidence in himself."

George often said that confidence was born in Vegas. That resonated with Colangelo, who has prioritized commitment and pride in the program above all else in rebuilding a brand that was in shambles when he took over following the bronze medal finish in 2004.

"The buy-in was there with him," Colangelo said. "Unless something unforeseen happens, he's got a great opportunity going forward."

Krzyzewski said he was "anxious" to see George workout this week. He watched George's emergence for the Pacers last season and could see some of the work habits start to pay off for him.

"I do think that when guys come here to participate, I think we all get better," Krzyzewski said. "Being in this atmosphere, playing for your country, learning good habits, training habits from other guys. Sometimes seeing how hard a guy who has made it, so to speak, prepares, plays, it helps."

George won't turn 24 until next May, but his experiences make him feel like a veteran on the 28-player roster that reported to Vegas this week. Anthony Davis is the only Olympian who is at the camp, so George is trying to take a leadership role and pass on some of the lessons he learned last summer to new faces like Michael Kidd-Gilchrist and Harrison Barnes.

But as far as he's concerned, he hasn't "arrived" yet at all.

"It's the same feeling this year," George said. "It's about establishing yourself again. There's so much talent here. It's starting from scratch again."