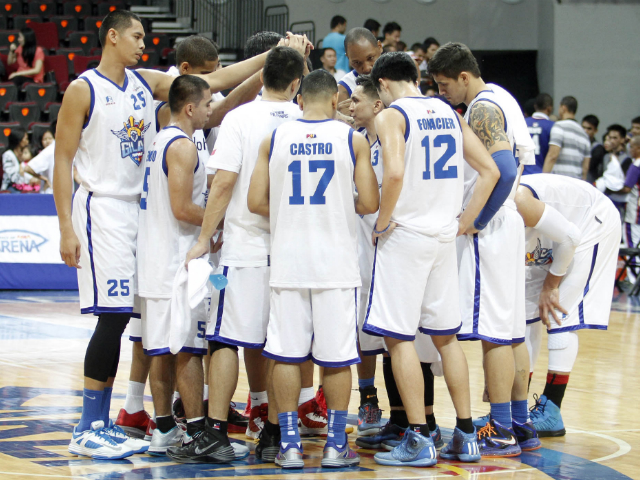 Gilas Pilipinas struggled in the first half but got their groove in the second for a 99-87 victory over the PBA selection, Wednesday at the Mall of Asia Arena.

Ranidel De Ocampo led Gilas with 16 points, and Gary David chipping in 14 of his own.

After an ugly first half, Gilas buckled down to business in the third and broke the game wide open in the fourth thanks largely to the efforts of David and Gabe Norwood.

But even with the victory, Gilas head coach Chot Reyes was unimpressed with the team's performance.

"I thought we were already at 80 or even 85 percent after our trip to New Zealand, but we took a huge step back in this game," Reyes said.

The coach specifically pointed to their bad start as the reason for his disappointment.

Paul Lee opened the scoring in the game with a long two and Nino Canaleta followed it up with a dunk off a Lee steal.

Ranidel De Ocampo opened the scoring for Gilas with two free throws at the 8:21 mark of the first.

After a Canaleta trey, Gilas went on a 10-0 run to build a 12-7 lead. Arwind Santos finally stopped the bleeding with a pull up jumper followed by a triple to knot the game at 12-all, before the first quarter ended with Gilas up 16-13.

Gilas was not able to find any kind of offensive rhythm in the first quarter after committing nine turnovers, five coming from Jayson Castro. The turnovers resulted to seven points for the PBA selection.

"Jayson Castro played horribly tonight. He played like he didn't belong to this team," Reyes said in the post-game press conference. "That's why i didn't play him anymore in the second half."

Reyes was also unimpressed with the performance of two more players. "LA Tenorio played horribly, even Marc Pingris. Our guard play was really bad tonight. Good thing Jimmy was there to bail us out."

Rafi Reavis started the second quarter with four straight points to retake the lead for the PBA selection, 17-16. A June Mar Fajardo free throw at the 8:51 mark tied the ballgame at the 8:55 mark of the second. Japeth Aguilar then broke the deadlock on their next possession with a tomahawk slam from a Jeff Chan pass.

Chan also added two triples and a nifty assist to Larry Fonacier to build a 27-21 lead for Gilas with 5:50 left in the first half.

Chris Tiu scored on a long two and a triple to give the PBA selection a 28-27 edge, but two free throws from Jayson Castro allowed Gilas to retake the lead.

Two charities from Cyrus Baguio closed the first half with the PBA selection holding a 41-38 lead.

"I was really not pleased with the way we played in the first half," Reyes said. "I told the boys at halftime that if we played like that against Chinese-Taipei, we will be down by 20 points."

Gilas played much better in the second half. Although the game was still close, it looked like they were starting to find their rhythm.

De Ocampo nailed a triple as the clock expired on the third quarter for a 65-61 count in their favor.

David started the fourth quarter by making back-to-back triples. Fajardo added an and-one play at the 7:37 mark of the fourth to give Gilas a 74-66 lead. Larry Fonacier then scored a corner three to give Gilas its first double-digit lead of the game.

After an unsportsmanlike foul called on Canaleta, baskets from Gabe Norwood and Jimmy Alapag gave Gilas an 83-68 lead to break the game wide open. Another triple by Norwood at the 4:48 mark gave Gilas a commanding 89-70 advantage. De Ocampo added another triple on their next possession to extend swell their difference to 22 points.

The PBA selection chipped away at Gilas' lead with triples from JVee Casio and Santos. They trailed Gilas 95-76 with three minutes left in the game.

"There's no reason for us to only play one quarter. We have to play four good quarters," Reyes said afterwards.

"This game will either get them down or it will fire them up for Kazakhstan. Let's just hope it will be the latter."