LeBron James puts on a show for Pinoy fans, suits up in scrimmage

LeBron James puts on a show for Pinoy fans, suits up in scrimmage 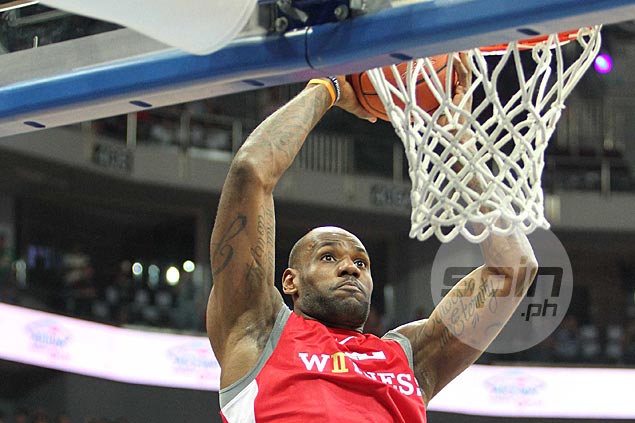 FOR LeBron James, the future is bright for Philippine basketball.

In his very first Manila visit, the reigning two-time NBA Finals MVP received a rousing welcome from thousands of basketball-crazy fans that braved the rains on Tuesday to catch him live at the Mall of Asia Arena.

“You've got a great future here,” James said, pointing to the Gilas Pilipinas team, the collegiate stars from the UAAP and NCAA as well as the Philippine 16-and-under team that joined him later in a scrimmage game.

In between basketball drills he demonstrated along with Gilas coach Chot Reyes, James put on a show to the delight of the fans, most of whom arrived as early as 12 noon and shelled out a fortune to secure tickets from scalpers.

The two-time NBA champion appeared on court at around 4:30 pm amidst smoke, fireworks and chants of 'MVP! MVP!' then obliged fans' requests by suiting up in the home stretch of a game between Gilas and a team of collegiate standouts which he coached.

True to form, James amazed the fans with his rim-rattling dunks, step-back jumpers and quick pull-up shots from beyond the arc but missed his last two attempts, allowing Gilas to win the exhibition game, 29-27.

Gilas forwards Marc Pingris, Ranidel de Ocampo and Japeth Aguilar all had their moments against James during the 10-minute exhibition match between Gilas and Team LeBron.

Twice, the 6-foot-8 NBA superstar scored on pull-up jumpers over Pingris from the three-point zone.

The 28-year-old James also brought the house down with his reverse two-handed slam after blowing past de Ocampo on a one-on-one play.

Before concluding his one-and-a-half hour appearance, James thanked the fans and announced his intention to return to Manila.