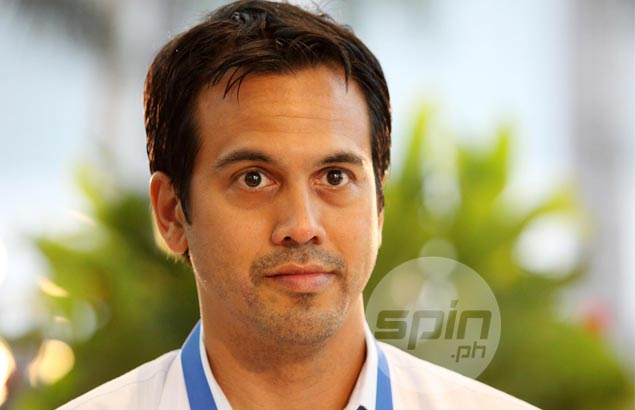 NBA Asia has lined up several activities to drum up interest in the first-ever NBA preseason game in the country between the Houston Rockets and the Indiana Pacers.

Unfortunately, a visit by Miami Heat coach Erik Spoelstra won’t be part of it.

Carlo Singson, NBA Asia country manager, said the soft-spoken Spoelstra is not scheduled to appear in any of the major events being prepared ahead of the October 10 game at the Mall of Asia Arena.

“It won’t necessarily be coach Spo this time,” said Singson.

The activities include visits by former and current NBA players beginning with former Lakers and Pacers star Sam Perkins, who arrived in the country on Monday.

But Singson said the door is very much open for Spoelstra, whose mother is Filipina from San Pablo, Laguna, if and when he plans to return to the country, saying they are actually just a phone call away.

“We told him to just call us and we will arrange everything,” said Singson.

So far, Spoelstra, fresh from steering Lebron James and the Heat to a second straight NBA title, has not sent word or given any indication that he will be visiting the Philippines for a fifth straight time.

There is also a standing invitation extended to him by tycoon Manny V. Pangilinan, who is president of the Samahang Basketbol ng Pilipinas. Spoelstra is one of the endorsers of mobile network Smart.

Spoelstra has been going to the country on a yearly basis during the offseason to perform NBA-related activities.