Chalmers: East 'will be a beast' next season

Chalmers: East 'will be a beast' next season 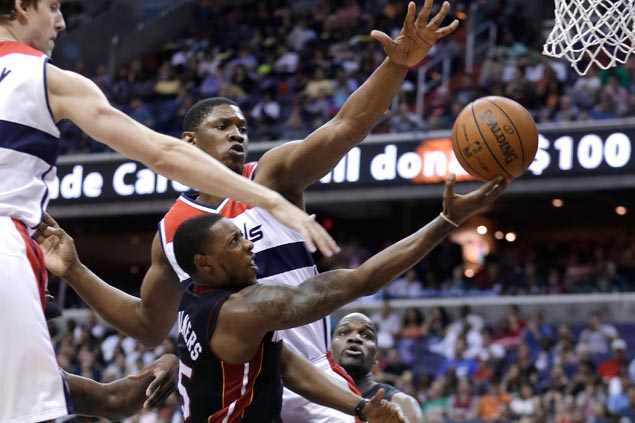 MIAMI — Mario Chalmers is having a short summer, for a good reason.

Chalmers and the Miami Heat will being trying for a third straight NBA championship and a fourth straight Eastern Conference title next season, and it's already clear that retaining those crowns won't be easy. Brooklyn and Indiana made offseason roster moves to improve their title shots, Chicago gets former MVP Derrick Rose back, and all that comes after a playoff run where the Heat had to survive a pair of Game 7's to win the championship.

So it's no wonder that Chalmers didn't take much down time before getting back into the gym this offseason.

"The East is going to be a beast this year," Chalmers said. "It's going to be tough competition every night. Brooklyn's making moves, Indiana just got Luis Scola, Derrick Rose coming back to the Bulls, it's going to be a tough Eastern Conference this year. At the same time, we'll still do what we do to try to get that third championship that we want."

Chalmers spoke Monday (Tuesday, Manila time) during a break from hosting his annual golf tournament — the "National Championship Classic" in Lawrence, Kan., the college town where he helped the Jayhawks win an NCAA title. The golf tournament serves as a fundraiser for breast cancer research and other charitable causes that work with his foundation, and Chalmers also recently held a basketball camp where he sponsored some at-risk children from the inner Kansas City area.

Chalmers is also hoping to bring a camp to his native Alaska this summer.

"For me, growing up in Anchorage, we didn't have different NBA players coming back and hosting camps, we didn't have coaches hosting camps for us," Chalmers said. "Now that I'm in the position I'm in, I try to give back as much as I can and interact with the kids. I want to let them know that it's all about business, but you can also have fun."

Chalmers will be entering his sixth NBA season, all with the Heat. He averaged 8.6 points and 3.5 assists this past season, shooting a career-best 41 percent from 3-point range.

And with the Heat choosing to amnesty Mike Miller, Chalmers' outside shot might be needed even more this coming season.

"I'm just going with it," Chalmers said. "I hated to see Mike leave. That was one of my closest friends on the team, and he's still going remain my brother, no matter what."

Training camp opens in about two months, and Chalmers said he didn't want to wait long before resuming work on his game. The Heat played until the third week of June, and Chalmers said that by early July, he was getting the itch to play again.

"Last season is over," Chalmers said. "Time to get ready for the next one.