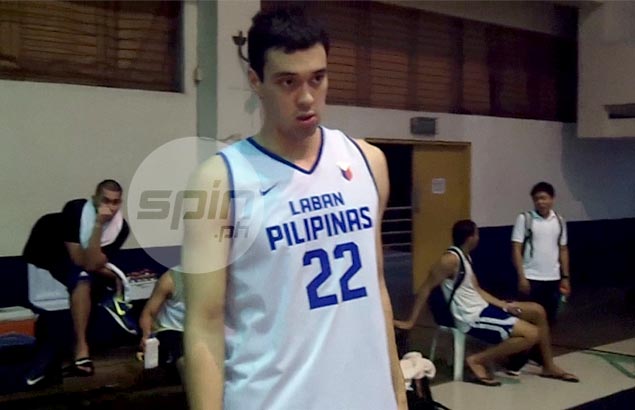 ANOTHER Cebuano big man is longing to make his way to the PBA - and he hopes to be the top rookie draft pick like June Mar Fajardo before him.

Former Gilas Pilipinas and Ateneo center Greg Slaughter told Spin.ph he is "now 99 percent" ready to join the coming rookie draft, which is set on November 3 at the Robinson’s Place in Ermita.

“I am now 99 percent ready. I still keep a small percentage though, you’ll never know what can happen (and) I just want to be ready for anything,” said the 7-foot former Blue Eagles slotman.

Though he admits supporting a Talk n’ Text coached by his college mentor Norman Black, Slaughter bared that he is open to play and give it his all for any team that will tab him in the draft.

The former University of the Visayas big man admits being aware that San Mig Coffee has the biggest shot at getting the top overall pick as it owns the first-round draft rights of Globalport.

The final draft order, however, will only be known at the end of the coming Governors’ Cup where a draft lottery will be done between the two teams with the worst records during the season.

“Whoever has the No. 1 pick, I’ll be ready. That’s what I am gonna set my sights on,” Slaughter reiterated. “I am ready for that. I played triangle once in Cebu - a little bit.

“I’d love to play triangle. I know (San Mig) coach Tim Cone really made my teammate Sonny (Thoss). He really flourished in that triangle. So it’ll be really good for me” said Slaughter.

The former PH pool member is currently helping out in Gilas buildup for the Fiba-Asia championships, simulating the games of other Asian big men in practice.

“I love to help out the team, do my scouting work and perform it in practice,” he said, pointing out that the Gilas experience has also helped improve his game.

“This will turn out beneficial for me, too. The PBA is a very physical league. I got the height so I’d like to make sure I have the strength and everything when I get there,” he said.

Asked about his thoughts on not making it to Chot Reyes' final roster, the 25-year old center replied: “Coach Chot made the best decision for the country. I am just doing my part, doing the best I can to contribute.”