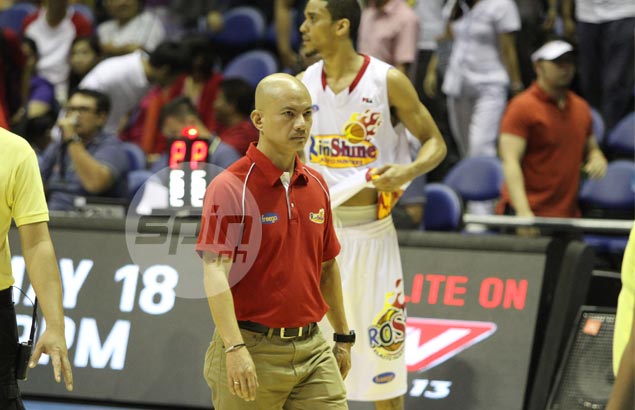 RAIN or Shine coach Yeng Guiao has his work cut out for him after being given an opening-day assignment in the Governors Cup on August 14, just a few days after the expected return of two key players from their stint with Gilas Pilipinas in the Fiba-Asia championships.

The E-Painters’ fiery coach said the schedule puts them at a disadvantage because stars Jeff Chan and Gabe Norwood, both on loan to the national squad, may have only two days to practice with the team before the team's opening match in the season-ending tournament.

That the E-Painters will be playing a powerhouse squad in San Mig Coffee will leave him no choice but to field his main men despite getting little time reacquainting themselves with the Painters system, Guiao added.

Marc Pingris, San Mig's lone representative in the national team, will be in the same boat, jumping to the PBA game straight from his stint in the Fiba-Asia showpiece.

The Fiba Asia Championship runs from August 1 to 11, and if Gilas Pilipinas manages to go deep in the tournament, it will be a tight transition to the PBA for some players and teams.

There will be no such problems for Air21, which will have returnee Zach Graham as its import, and Globalport, which is tapping Kennesaw State Owls standout Markeith Cummings, when they square off in the 5:15 p.m. curtain raiser at the Mall of Asia Arena.

Described as an energy guy on the floor by Batang Pier coach Junel Baculi himself, Cummings will be coming fresh from a three-year collegiate stint with the Owls, a US NCAA Division I school.

Globalport's Gary David is the only player on loan to the national team.

Guiao said he will try to find a way to get the two E-Painters blend in quickly without affecting the team chemistry since they have been practicing for around three weeks already.

Rain or Shine is parading 2011 Governors Cup Best Import Arizona Reid, who is fresh from a stint in the Swiss League.