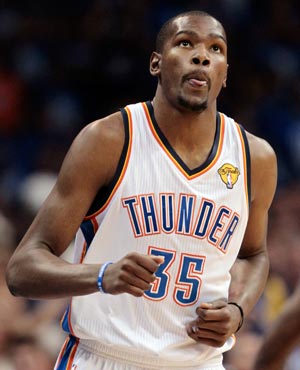 There is one thing he won't be able to escape.

"Kevin Durant is the face of USA basketball going forward," said Jerry Colangelo, managing director for the national team. "He loves to compete, he has a passion for the game, he's won a lot of gold medals, he's just going to win more — we hope."

Oklahoma City forward Durant and Minnesota Timberwolves center Kevin Love announced Wednesday they've committed to Team USA for next summer's 2014 World Cup in Spain. Durant said he made the commitment to Krzyzewski late Tuesday night, while Love officially made his announcement during the news conference.

The two NBA stars made the announcement in an impromptu news conference after Wednesday's practice, alongside Colangelo and head coach Mike Krzyzewski.

"The fact (Durant has) committed as early as he has is a statement," Colangelo said. "We think there will be a few others that will come along, along with Kevin Love, who is a big part of our program. So we're excited about the early announcement."

"Hopefully this will have a snowball effect to where other guys will then commit from previous years, guys who have experience with FIBA basketball," Love said.

And while Colangelo and Krzyzewski were excited about both players' return — and as the Team USA coaching staff remains in scouting mode — the 28 minicamp participants know this week has been nothing short of a tryout for next summer's squad.

"This is definitely an audition," Los Angeles Clippers center DeAndre Jordan said. "Everybody is taking it seriously, it's really competitive and it's intense. That's the thing I love about it. You're learning from Hall of Fame coaches, there's everybody here who's everybody. The young talent in the league here is great, and it's going to help us improve for next year."

Added New Orleans Pelicans guard Jrue Holiday: "This is a really good opportunity. You want to prove you can play on this team, but at the same time you want to have fun, you want to get better, become a better teammate and better player."

The minicamp concludes Thursday night with the USA Basketball Showcase, an intrasquad game at the Thomas and Mack Center. Krzyzewski said after running the players hard over the first two days, he treated Wednesday like the day before a medals-round game so they wouldn't be burnt out Thursday.

"I think they'll be fresh, excited and it'll be an exciting game," Krzyzewski said. "We're not making any announcement right after this ... so we get a chance to watch these guys during at least half of the NBAseason. I'm sure somewhere in January, or somewhere along the line, a pool will be announced.

"Today was a huge day for Kevin Durant and Kevin Love to announce their commitment going forward. The more we learn about who we might have helps us in making decisions about who we need to add."