'King's' touching gesture: Lucky kid on cloud nine after being gifted with playing jersey by LeBron

'King's' touching gesture: Lucky kid on cloud nine after being gifted with playing jersey by LeBron 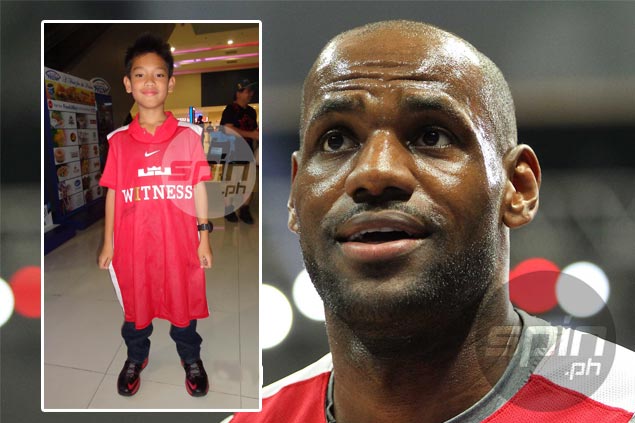 RONAN Raphael Padriga wasn’t even supposed to watch the ‘LeBron James Fans Day’ at the Mall of Asia Arena on Tuesday afternoon.

But thanks to a last-minute attempt by his mother to get tickets, the 10-year-old not only got to see his idol but he was also gifted the jersey James wore during a scrimmage game between the Gilas Pilipinas squad and a UAAP All-Star team where the Miami Heat star was the player-coach.

With the program nearing its end, James was seen scouring around for a lucky fan to be given his playing jersey when he spotted Padriga at the lower box section of the Mall of Asia Arena.

James then handed the jersey personally to a wide-eyed Padriga as the kid was brought down from to the patron seats.

Padriga’s mother Ruth was teary eyed as she watched the event unfold.

Ruth’s son wanted to see James in person so much that she asked their driver to line up outside the Nike Park outlet in the Bonifacio Global City in Taguig for the free tickets to James’ event. Her driver came out empty handed.

Desperate for tickets, Ruth turned to Twitter in the hope of finding someone who has one. She got lucky when a follower from sports apparel store Planet Sports gave her two tickets to the event.

Ronan, a Grade 5 student at Ateneo, said he has been a James fan since the four-time MVP's days with the Cleveland Cavaliers.

“It’s a dream come true,” said Ronan, who became an instant celebrity as fans posed for pictures with him.

“When he was in Cleveland, he was so good in his first NBA Finals,” said Ronan.

LeBron, by the way, has also signed the prized jersey, which Ronan plans to frame for posterity.

Ronan said that he also wants to be a basketball player someday and even dreams of playing for the Ateneo Blue Eagles.