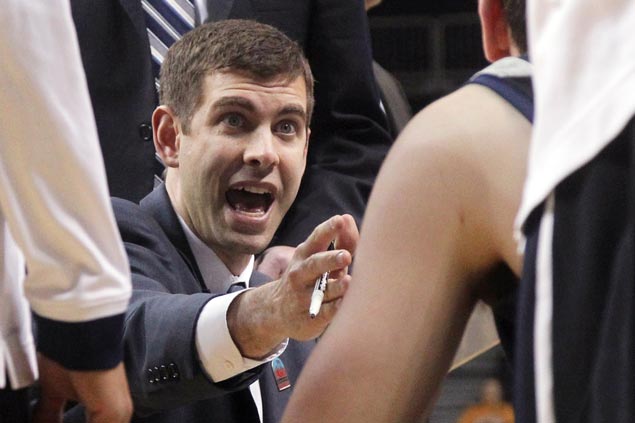 BOSTON — The Green are getting greener.

With aging stars Kevin Garnett and Paul Pierce on their way to the Brooklyn Nets and Doc Rivers coaching the Los Angeles Clippers, the Boston Celtics hired 36-year-old Brad Stevens from Butler as their next head coach Wednesday (Thursday, Manila time).

The move turns the tradition-bound franchise over to a mentor who is younger than Garnett and wasn't yet born when Bill Russell won his 11th NBA championship in 1969 (or even when John Havlicek added two more in the 1970s). It's the first time the Celtics have hired a college coach since Rick Pitino in 1997, and their first coach with no NBA experience of any kind since Alvin "Doggie" Julian gave way to Red Auerbach in 1950.

"Though he is young, I see Brad as a great leader who leads with impeccable character and a strong work ethic" Celtics general manager Danny Ainge said in a release. "His teams always play hard and execute on both ends of the court. Brad is a coach who has already enjoyed lots of success, and I look forward to working with him towards Banner 18."

Stevens has spent the last six years as the coach of Butler, leading the Bulldogs to back-to-back national championship games in 2010 and '11. He has a career winning percentage of .772 and never won fewer than 22 games in a season.

He takes over a team that is three seasons removed from an appearance in the NBA finals; the Celtics won their unprecedented 17th championship in 2008. But with Garnett and Pierce showing signs of slowing down in this year's playoffs, when Boston was eliminated by the New York Knicks in the first round, Ainge has decided to rebuild.

He allowed Rivers to take over the Clippers, extracting a first-round draft choice in return. Amid last week'sNBA draft, the Celtics and Nets agreed to a deal that would send Garnett and Pierce to Brooklyn in exchange for a package of players along with three first-round draft picks.

Now, Stevens will be the one to work with those young players.

"Our family is thrilled for the opportunity given to us by the leadership of the Boston Celtics, but it is emotional to leave a place that we have called home for the past 13 years," Stevens said in a release issued by the university. "We truly love Butler University and Indianapolis, and are very thankful to have had the opportunity to celebrate so many wonderful things together."

At Butler, Stevens was 166-49 — the most wins for any Division I coach in the first six years of his career. In 2009-10, the Bulldogs went 33-5, including the Horizon League's first 18-0 conference record, a 25-game winning streak and an appearance in the NCAA title game, where they lost to Duke 61-59 when a last-second, half-court shot bounced off the backboard and rim and out.

"Brad has given his talent to our university with exceptional generosity, integrity, and humility," Butler President James M. Danko said, calling Stevens "a beloved member of our community."

"We have done everything we can to keep Brad here at Butler; however, the Celtics team has offered Brad and his family a unique opportunity with which no university can compete."