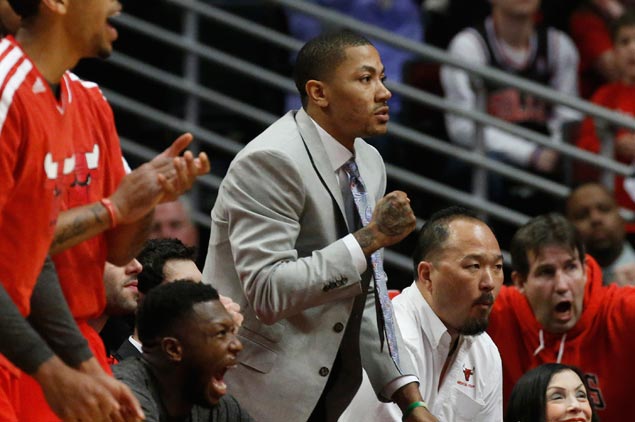 In an interview posted Wednesday (Thursday, Manila time) the team's website, Rose said he had to be selfish in his rehab as he tried to work his way back from a torn anterior cruciate ligament in his left knee even though sitting out was "one of the hardest things I've had to go through in my life."

"I'm not a selfish guy at all, but having this injury and going through what I had to go through and being smart, it's something that I had to be selfish with," he said. "I couldn't worry about anyone else but myself and my health."

He thinks fans who questioned him will realize sitting out was the right call once they see him playing again.

"I think me going on the court and showing them and letting them know it was the right decision," he said.

Rose hasn't played since he crumbled to the court near the end of the 2012 playoff opener against Philadelphia, sending the top-seeded Bulls to a first-round exit. He had surgery on May 12 that year, and his doctor said the recovery would probably take about eight to 12 months — the final stage being playing in games.

Rose practiced without restrictions the last few months of the season but never suited up for a game even though he had medical clearance. He and the Bulls never publicly ruled out a return, either.

Without him, Chicago clawed its way to 45 wins and knocked out the Brooklyn Nets in the first round of the playoffs before bowing out to the champion Miami Heat. They were particularly banged up during the postseason, with players fighting through injuries and illnesses and Rose serving as a spectator.

The Chicago product saw his image taking a hit, with analysts such as Charles Barkley and Steve Kerr, not to mention some fans, questioning why he wasn't playing.

"When you're in practice, of course it's not like game-like speed, unless it's like training camp," Rose said. "Game-like experience is totally different when you have strategy, this and that, double teams. When I play, I get double-teamed a lot. We play the same defense (in practice) we play in the game, so there wasn't any double-teams. So I was able to roam around freely. And in a game ... I wasn't able to take on that double-team yet.

"Every day I was working out like my leg is going to feel better," he continued. "I was pushing myself every day, eating right, trying to take care of my body so that I can be out there as soon as possible. But it didn't happen."

Rose insisted he had his teammates' support.

"They saw how hard I was working in practice, just trying to rebuild my leg," he said. "All my teammates that were going through injuries, they used to tell me don't rush back just because they were going through stuff. So just to hear them say that, they knew I was trying to get back on the court as quickly as possible. They made a huge run at it. When they were playing, I told them things that I saw if they didn't see, or I was just working with them, just to show them I really cared about the team, and like I said they fought for me."