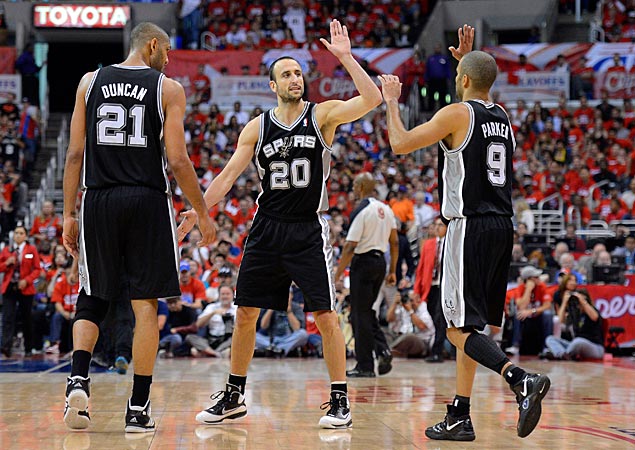 SAN ANTONIO — Manu Ginobili is sticking around to see if the San Antonio Spurs can get back to the top.

Ginobili tweeted Wednesday (Thursday, Manila time) that he is staying with the team he has helped win three NBA titles and nearly a fourth last month.

"Thrilled to announce that as I always hoped, I'm gonna stay with the @Spurs for two more years," he wrote.

Ginobili, who turns 36 this month, battled injuries during the season and said he would think about retirement after the playoffs. But he helped the Spurs come within 28 seconds of the championship before falling to the Miami Heat in seven games, and his return ensures the longtime Big Three that includes Tim Duncan and Tony Parker will be in place next season.

Details of the contract agreement weren't available, but Ginobili figures to take a pay cut from the $14.1 million he made last season as the Spurs' highest-paid player. Duncan did the same thing last summer, going from $21.2 million to $9.6 million.

Teams can reach agreements with free agents, but contracts can't be signed before July 10.

The playoffs were rough in spots for Ginobili, raising more questions about whether the Spurs would be willing to bring him back considering his age and the heavy wear on his legs from international competition with Argentina. He won Olympic gold at the 2004 Summer Games in Athens.

Ginobili's regular-season and playoff scoring averages were the lowest since his rookie season in 2002-03. A couple of games in the NBA Finals were plagued by poor shooting and turnovers, including eight in Game 6 when San Antonio coughed up a five-point lead in the final half-minute.

Still, Ginobili can be a valuable weapon from the three-point line, where he shoots 37 percent for his career, and as a ball-handler who can get in the lane and score or find an opener shooter. He's averaged 14.9 points, 4.0 assists and 3.9 rebounds in 11 seasons.

In last week's draft, the Spurs chose Livio Jean-Charles and Ohio State's Deshaun Thomas to beef up their front line, though Jean-Charles is 19 and isn't expected to play in the NBA for some time.

Thomas is expected to battle for a spot on the roster next season. A first-team all-Big Ten selection, Thomas averaged 19.8 points, 5.9 rebounds and shot 34 percent from 3-point range.

DeJuan Blair is an unrestricted free agent, Tiago Splitter is restricted and Boris Diaw is mulling a player option. The Spurs are mindful of salary-cap considerations: Two years ago, they traded fan favorite George Hill to Indiana for the rights to Kawhi Leonard, who was the 15th pick in the draft and has turned into a key player for San Antonio.